About 2002 after taking a 2 year sabbatical from the sea whilst recovering from 12 years of flat out commercial fishing, I started targeting Tope in my local Dundalk bay. Over the next few years like many others I traded up boats and started exploring further afield.

About this time angling forums were starting to emerge on the internet. I signed up for a few and in 2006 I attended my first Boat Angling Ireland meet up at the beautiful Lough Swilly. The target was Tope  and they were encountered in modest numbers and size, but it was the sharing of fishing stories during the after fishing sessions that had the biggest impact on me. Really good Anglers try to help others I’ve found.

Porbeagle Sharks,how and where to catch them were the regular topics of discussion and our chats continued though the forums after we returned to our home ports. 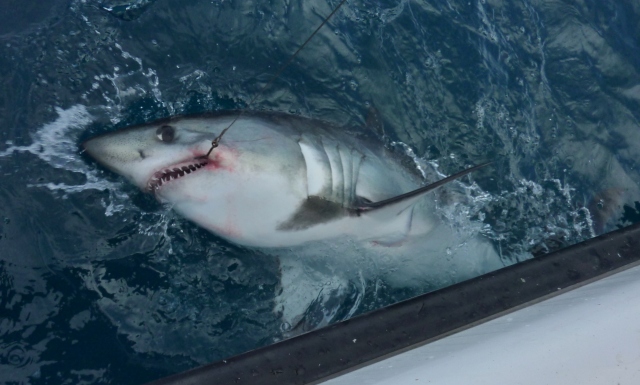 A fine porbeagle comes to the side of Mark’s boat

Through contacts made at these “meets” news started to filter through about Porbeagles being lost and some even being boated on charter boats based in north Donegal. Soon the private boats were on the hunt for Porbeagles and a couple of “hotspots” were identified. From now on our “meets” in this area would centre around Porbeagles rather than Tope and my fishing calender would be rearranged permanently.

At this stage I was close to the bottom of the Porbeagle learning curve . New gear had to be purchased. Good Blue shark gear would suffice though. TLD 20/25’s and 20 to 30lb rods. 400lb wire to strongly forged hooks.  Everything on the subject of Porbeagle fishing was read, absorbed and re-read. I think it’s important to have a baseline knowledge to measure one’s own growing experiences against.

I even started catching some Porbeagles. Early on it was apparent that it was important to”match the hatch” while porbeagle fishing. While fresh Mackerel was nearly always acceptable, Pollack, Coalfish, etc were only acceptable when the sharks weren’t pre-occupied with the Mackerel Shoals.

Other early lessons were that in common with most predators prolonged high barometric pressure seemed to put them “off”.They would be visable on the surface but were often very hard to tempt. Rough seas and heavy rainfall (hard to avoid in the northwest) also scattered the bait shoals and the Sharks.

Dubby whilst being handy in attracting baitfish and also some curious Porbeagles was less of an attractant than the disturbance caused by struggling baitfish on hooks and the mild electrical currents, for example those coming from the sonar transducer.

Porbeagles are an almost playful Shark, some of their behaviour is almost dolphin like, in that they often circle and investigate boats as well as taking up station underneath them like a Stone Bass would.

As years went by I learned a little bit more from other anglers and the fish themselves. I find a lot of the Tope’s habits are replicated in Porbeagles.

Lets look at the important issue of Prbeagle location. I’ll focus on inshore locations. Porbeagles love structure. Edges of reefs, with plenty of Tide are a great starting point. Tidal swirls and rips whilst being a bit frightening in a small boat often offer prime Porbeagle fishing opportunities. Also where rock meets sand and where two or more currents collide. Keep an eye out for gull activity too. Wrecks can often hold a Porbeagle or three at certain times. In fact a few years ago after a few hours haulding up fish from a deepwater wreck, my boat partner and I were a bit knackered, we had no fish snatched all day but my boat partner still dropped a coalie over the side with a 12/0 hook in it as we slumped in our seats. After literally seconds it was snatched by a 104lb Male Porbeagle which gave a great account of itself. This fish must have been lurking just under the boat attracted by the commotion.

A satelite tagged porbeagle about to be released

I previously mentioned Tope sharing habits with Porbeagles and it is certainly true that both species tolerate each other and share habitat. Many times myself and my boat buddies have been busily catching Tope and then out of the blue a Porbeagle is hooked up and visa versa. For example last year my buddy and I were catching a Tope a drop, using Porbeagle gear of course when he began to take ages to bring a fish to the boat. I slagged him off about being a big girls blouse while I reached to grab the leader and then I noticed he was attached to an 80lb Porbeagle. He won’t let me live that one down for a while to come probably never.

I use a heavy duty tube boom with a lead clipped on with my 14foot shark trace flowing from it. I usually drop this to the bottom and wind it back up a number of turns off it. I will vary this with my other rod. I don’t mind hooking up on Tope I think it’s a good sign if they’re about. I’m quite happy using a normal shark trace once I have an experienced person on the boat with me, otherwise I will use a wind on leader to lessen the drama at the rail.

This year I have upgraded my Porbeagle tackle to a 50 to 80lb rod and a 30 wide reel loaded with 80lb mono. The reasons for this are that the average size of Shark is increasing where I fish and also I’m trying to shorten the fight time to lessen the stress on the fish and to not having a bored crewman frustratingly waiting for his turn to fish again.

This hasn’t altogether worked as during my last trip I hooked a Porbeagle which a few minutes into the fight swam up to the boat to check us out(this is typical). My crew mate asked me if I wanted him to grab the leader, yes the shark was that close! I said no. Well that was the last I saw of that fish, because 1 hour and 10 mins later I reeled in a straightened 10/0 circle hook with no Shark attached, Goddam it!

I doubt that fish was even 200lb. They have great stamina, I have put a tail rope on a 120 pounder and nearly been pulled in after a 1 hour fight when it went buck mad. Then there is the story of the Porbeagle that wouldn’t fight, but that ones for another day.

We are three anglers who enjoy all aspects of fishing. Whether we are blanking or catching were happiest on the bank or shore. If you like your fishing join us by watching our many trips and as we interview some top anglers along the way.....
View all posts by paddykeogh20 →
This entry was posted in Uncategorized. Bookmark the permalink.