Two pb’s in one session by Aidan Cox

I made the annual trip to the Barrow at St. Mullins. Speaking to other anglers when I got there revealed there wasn’t much coming out that day.

I gave it an hour and had just the one fish, so I decided to change plan and head to a beach Mark instead.

It was still early so I made my way to the coast and got set up with plenty of time to spare before the tides would be right.

I was hoping for some hounds but just happy to be out fishing. I set the first rod up with crab on a pulley rig and for the second rod I set up a tope bait, as I was putting the tope bait on the first rod went bang.

I was thinking lovely, first hound of the year, as I got it close I realised it was a bass. Got it in and weighed  and it turned out to be 8.2lb and a new pb happy days.

I got the rod back out and got the kettle on and had a few lucky jaffa cakes! I was also changing the tope baits regularly as they were coming back in with munch marks from doggies. I was swapping rigs to cut down on the time the baits were out of the water.

I’d say an hour and a half went by when I was bringing in the crab setup when I turned around and the ratchet was screaming on the tope rod. That sweet sound that only a tope can make.

I had to drop the other rod and make a dash. I bent into the fish to set the hook and it went off running down the beach. There was an angler to my right and I asked him to bring in my other rod and was grateful for the help.

I was fighting the fish for about ten minutes before getting it into the surf and it was finally landed. Thanks to those who helped you know who you are. We weighed it and a second pb on this surprise session, I was over the moon. The fish came in at 37lb. I was a happy man. 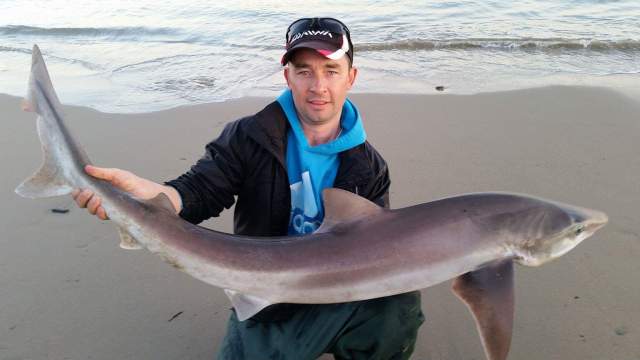 Two pb’s on the one session, 37lb tope

We are three anglers who enjoy all aspects of fishing. Whether we are blanking or catching were happiest on the bank or shore. If you like your fishing join us by watching our many trips and as we interview some top anglers along the way.....
View all posts by paddykeogh20 →
This entry was posted in Shore fishing and tagged Aidan Cox, bass, tope. Bookmark the permalink.