Bluefin in the Adriatic by Rob Millard

The process of choosing a family holiday destination in our house is always contentious. My suggestions of Islamorada, Cape Verde or The Azores, are seen for what they are, shameless attempts to visit some of the sport fishing capitals of the world. This year we settled on Croatia, and I set about finding out how I could squeeze a day’s sport in during our 2 week holiday.
While searching through the many fishing charter operators on the Dalmatian
coast, I came across ‘Predator Big Game Fishing’ in Jezera. Their website &
Facebook pages had extensive galleries of photos & videos of bent rods and fish on
the deck, which gave me confidence. Their contact details can be found on their website http://www.predator-game-fishing.com

I emailed them with the dates of my travel, and Željko emailed back explaining that the bluefin only move back inshore during July and that I should take a day in the second week of my holiday to give myself the best chance. On his advice I picked a date, and transferred a deposit.

On the day of the fishing, I arrived at Jezera to blue sky and hardly a breath of wind. I met the skipper Vladimir on the pier just before 9am, and as soon as I stepped on his smart 27ft boat, I realised he was running a serious sportfishing operation, and not fishing trips for tourists & day trippers.

The gear bore names synonymous with game fishing throughout the world, Stella, Tiagra & Alutecnos, and at the business end were flourocarbon leaders and Owner Mutu hooks. 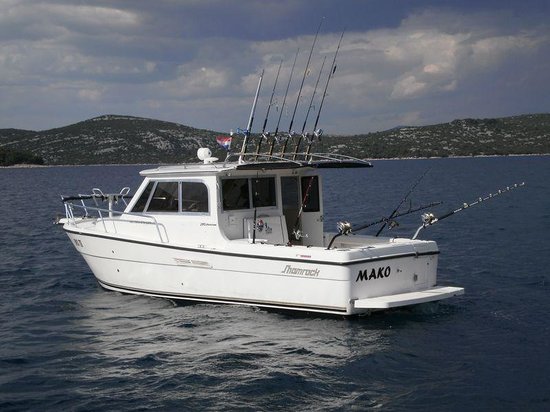 Once we were outside the confines of the harbour, Vladimir opened the throttle,
and our steam out to the fishing grounds, southwest of the famous Kornati Islands,
took about 45 minutes cruising at 18 knots.

When we reached the chosen mark, we
did a drift across it with sabikis, and soon had a dozen or so Mackerel & Scad in the
livebait tank, more than enough to get started with. Vladimir repositioned the boat, dropped anchor, and set out 2 live baits on balloons.

Seeing first hand how the gear is
set up, and baits are rigged, you pick up tricks and nuances that you just don’t get by reading articles and forums. I was carefully watching each detail, and the amount of questions I asked was bordering on interrogation, but a lot of the appeal of fishing abroad is learning new things, and I wanted to make the most of it.

Now trolling for big game fish can be spectacular, but the hours, sometimes days
in between strikes can be mind numbingly boring, as the angler has nothing to do but
watch a spread of lures.

As we were anchored in 70m of water, and fishing live baits however, it was possible to fish the bottom with 2 hook rigs baited with mackerel strips while we waited for a Tuna. This brought a steady stream of fish, the only one of which I recognised was black bream, but there were 3 other species that kept making an appearance, one of which wouldn’t have looked out of place in a tropical aquarium. John Dory are also regularly caught here, although small live baits prove more effective apparently.

This fishing certainly kept me busy, and helped keep the live bait tank topped up, as I would often pick up a mackerel or scad on the way up with the spare hook.

A short time after lunch the furthest balloon went down, and started heading
towards us at a rate of knots. I quickly wound down on the fish, and as everything
came tight, the 50lb class rod arched over, and the reel began to sing that beautiful
song.

As the fish headed off on it’s first run, we cleared the other lines, and cast off
the anchor. I moved to the front of the boat from where I fought the fish, and after a
couple of typically powerful runs, some big head shakes, and a couple of pin wheels,
the fish was at the side of the boat. Vladimir sunk in the gaf and tied the fish off on a stern cleat. After motoring back to the anchor and tying off again, we got some
celebratory cold beers from the fridge in the wheelhouse, and wasted little time in
rigging some more live baits, as by now, we were marking tunas under the boat every
minute or so.

Despite fishing on until after 6pm, we didn’t manage to get another bite,
although I was pleased to have got one, given it was still early in the season.

Vladimir explained to me that his bluefin season runs from July right through to the 31st December when the fishery is then closed, with the Autumn & Winter months being particularly good.

By the end of the month of July, you could expect rather than hope to catch a fish every day, with multiple fish days common enough. “But we have giants in Ireland” I hear you say, “why would I go to Croatia?” but I believe this provides a different angling experience to the traditional trolling with large squid bars fishery that we have in Ireland.

Indeed there are times during the season when Vladimir gets to target bluefin with spinning gear and topwater lures such as poppers & stickbaits. And don’t think for a minute that there’s no giants here too, Vladimir catches 300 – 400lbs fish every year, and on the last day of my holiday he reported
losing a fish he reckoned was 230kg (500lbs) after a lengthy fight.

His fishing doesn’t stop when the fishery closes on New Year’s day either, for he has some spectacular deep jigging for Amberjacks through the winter and spring. These range from 25 –100lbs and days with 15 – 20 fish a real possibility.

With Ryanair running flights into
Zadar for much of the year, and with very reasonable rates for the fishing, anyone
looking to get away and try something different, without having to rob a bank, should take a look at Croatia!

Just a final word on sustainability. Vladimir buys several tonnes of Bluefin quota at the start of every year, and so the fish that he lands make up part of Croatia’s national commercial quota.

Following ICCAT drastically cutting the eastern Atlantic & Mediterranean quota for Bluefin several years ago, we witnessed an amazing return of these fish to our waters here in Ireland, and indeed last year several fish were caught in southwest England and Wales, areas not previously regarded as Bluefin hotspots. Vladimir too has seen a significant improvement in the Adriatic.

We must hope that the stock continues to be managed correctly, so that anglers all across Europe can continue to enjoy catching one of the world’s most revered game fish and the mightiest tuna of them all the Atlantic Bluefin.

We are three anglers who enjoy all aspects of fishing. Whether we are blanking or catching were happiest on the bank or shore. If you like your fishing join us by watching our many trips and as we interview some top anglers along the way.....
View all posts by paddykeogh20 →
This entry was posted in Boat fishing, Travel and tagged bluefin tuna, Croatia, Rob Millard. Bookmark the permalink.

2 Responses to Bluefin in the Adriatic by Rob Millard